Traditional Liposuction is one of the most popular forms of cosmetic surgery and typically starts with the administration of some form of anesthesia including local anesthesia, intravenous sedation, or general anesthesia accompanied by the infusion of a saline solution into the area of the body where liposuction will be performed. The solution contains medication to minimize pain and bleeding. Then, a small hollow tube attached to a vacuum is inserted through a small incision into the fat layer beneath the skin. It’s moved around to break up the fat, which is then sucked out of the body. 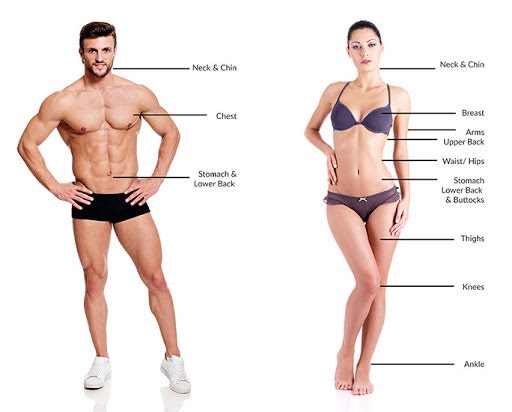 Laser Liposuction focuses on low-energy waves delivered by a thin laser fiber that is inserted through small incisions. The laser energy is focused on the part of the body where you would like to have a fatty pocket removed. After the fat is melted, a small cannula is used to suck out the liquefied fat.

The fat is dissolved by the ultrasonic waves that are emitted from the end of a cannula that is inserted through small incisions. Ultrasonic waves delivered through the cannula emulsify or liquefy the fat. After the fat is liquefied, it is then sucked out through a small cannula.

How does Assisted Liposuction work?

Laser-Assisted liposuction takes advantage of the power and technology associated with medical laser beams to liquefy the fat which is then sucked out of the area.

Laser or Ultrasound-Assisted Liposuction offers the advantages of sedation rather than general anesthesia, less trauma to the site, and smoother skin in the end. You will probably be sore and a little swollen for a few days following the procedure, and painkillers will keep you comfortable.  Your Surgeon may advise you to wear a special compression garment to speed healing and you will be able to return to work within a week.

About the Author: Paty Barrueco

Originally from Mexico City, I left the metrópolis and started working in the best hotel chains all along the Mexican Pacific and the Caribbean.  Years later I followed my passion and spent many years traveling across America and Europe while working on board international cruise ships as an officer in charge of the passenger’s experience.  As your Destination Manager, my job is to ensure that your medical journey is exciting and memorable by providing you with the best surgeons and best pricing, so please feel free to contact me directly at [email protected] to leave me your comments.

Are You Ready For Cosmetic Surgery?

A close friend reveals that her refreshed appearance is really due to a facelift. Or, you overhear your neighbor telling your sister that her secret to slimming down is the 3 dimensional Vaser Liposelection. You start to wonder about getting your own metamorphosis… As with all surgery, cosmetic surgery is […]

All About Rhinoplasty and Nose Shaping – Are You a Good Candidate?

Experience a Teleconsultation in Barcelona

Barcelona is a top destination for International Tourists in Spain, with its absolutely amazing attractions like “La Sagrada Familia” or Park Güell featuring the remarkable designs of Architect Antoni Gaudi. While we wait for the travel restrictions to end soon, and you are able to visit this fabulous spot, I […]

0 comments
Send this to a friend